BEFORE | There was a significant amount of staining and buckling of the paper’s surface due to water damage.

BEFORE | This is an example of an antique poster that had ripped along the creases where it had been folded. There are water stains and discoloration as well.

AFTER | The rips have been repaired and the artwork has been relined. The water staining was also addressed.

Yellowed and Cracked Painting of Mother and Daughter by Ivan Olinski BEFORE | This painting exhibits yellowed varnish and a paint film which is cracked and lifting.

AFTER | With the yellow tonality gone, the soft greens and vibrant auburns can now be appreciated. Also, the pronounced cracked and lifting paint film has been set down.

Woman and Child by Hughes Merle

Deteriorated Engraving of St. George and the Dragon by Albrecht Durer 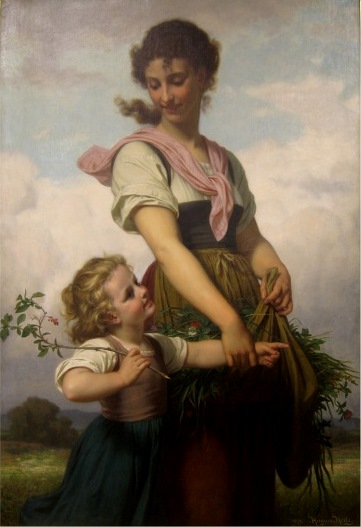 BEFORE | Woman and Child, art by Hughes Merle (before conservation) – This salon painting is by the 19th century academic painter Hughes Merle. Merle was a student of the leader of the French Academy, William Bouguereau. He was such a talented student that Bouguereau entrusted Merle with instructing his wife. In the example seen here before treatment, one can see the discolored varnish that gives the painting an overly hot look. In addition to the muddy tonality, the crackle and raised cupping detract significantly from the bucolic image and the artist’s highly accomplished technique.

AFTER | Woman and Child by Hughes Merle (after art conservation) – The painting after undergoing conservation treatment. The painting was cleaned and lined. The cracking and cupping are no longer visible, and the colors have the cooler tonality that the artist intended. The painting’s beauty is now evident for all to see.

BEFORE | This wood engraving by Albrecht Durer has deteriorated over time. Stains and overall discoloration due to acidic content have become distracting to the image.

AFTER | The spots have been removed and the acid in the paper has been neutralized. This acidic content caused discoloration and premature deterioration of the artwork.

Portrait of a Man 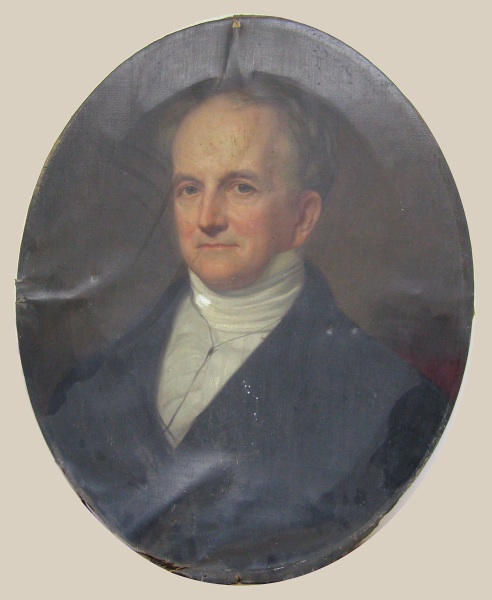 BEFORE | This handsome portrait is in rough shape. It is covered with dirt, grime and discolored varnish. The surface has abundant raised crackle and cupping, causing distracting irregularities in the surface plane. There are paint losses scattered over the surface and, without treatment in the near future, more will follow, diminishing both the appearance and value of the painting.

AFTER | Portrait of a Man (after conservation) – The painting after complete restoration. All of the distractions have been corrected, leaving the viewer to focus on the sitter’s personality and the artist’s skill, not the condition of the painting.

BEFORE | George Peter Alexander Healy was one of the pre-eminent American portrait painters of the mid nineteenth century. His huge painting Webster’s Reply To Hayne hanging behind the stage at Faneuil Hall, Boston contains one hundred and thirty portraits. In this oval portrait of British Ambassador Lawrence, one can see the result of years of neglect. In addition to the heavy deposits of dirt, grime and discolored varnish, the canvas has split where it turns over the edge of the stretcher. This has resulted in very uneven tension, exacerbated by the oval shape, causing the buckling and severe distortions that can be seen. The frame is also in very poor condition, with chipping gesso, missing gold and dirt.

AFTER | The painting was cleaned, flattened and lined. The bulges, folds, and dents visible in the ‘before’ photo were removed. The finished painting is flat and stable, and the colors look pure and fresh. BEFORE | This poster on thin, brittle paper shows signs of acid burn, discoloration, water damage and severe damage along its outer edges.

AFTER | After flattening and mending, the work no longer suffers from the ravages of time.

If you have works of art in need of restoration or conservation, contact us to see how we may be of help